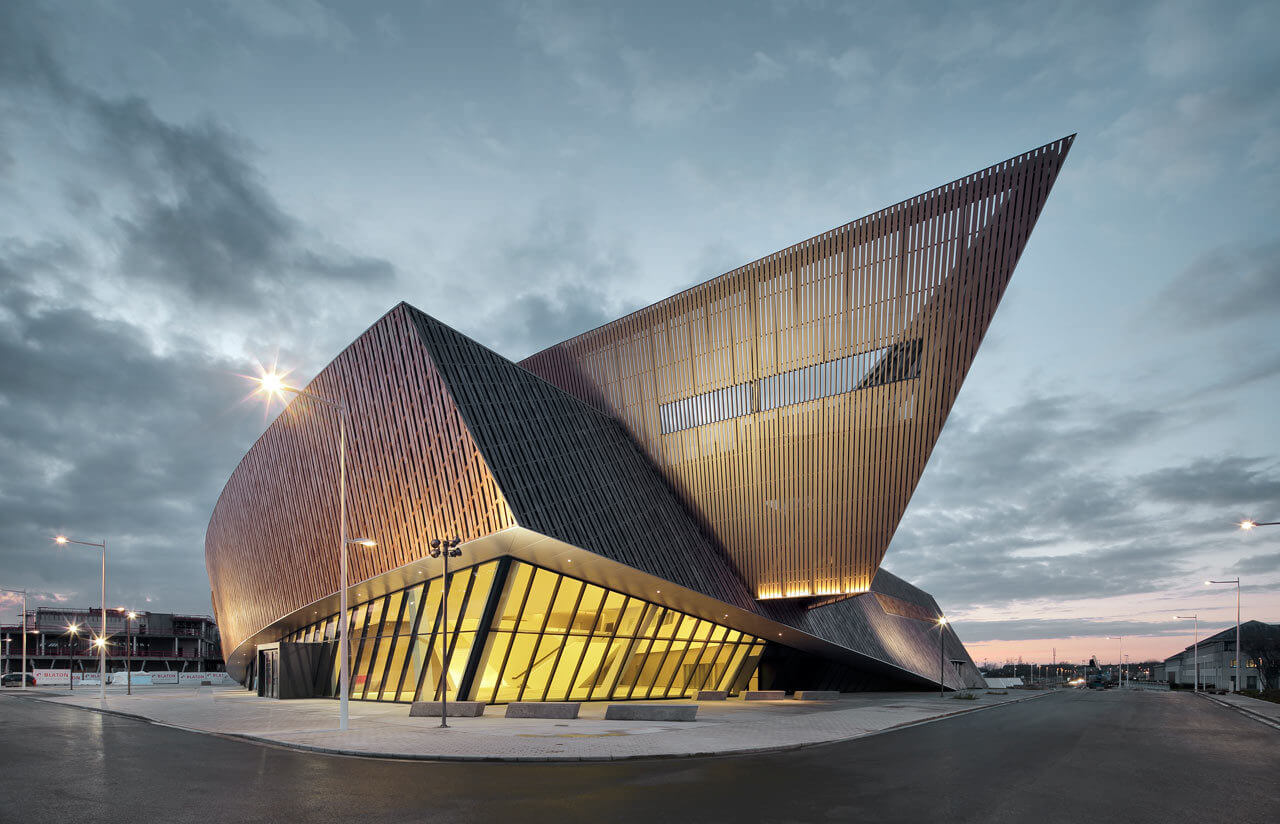 Studio Libeskind, the firm who designed Freedom Tower in NYC, has recently revealed its plans for a New Jersey neighborhood. Located in the town of Phillipsburg, the site is designed to better connect the town to its neighbors.

The site will spread across 7 acres and is currently planned to feature a number of stepped multi-use buildings. It’ll be located on the bank of the Delaware River. Drawings released by Studio Libeskind show the site will contain space for retail and parking on the lower levels with housing above.

But the plans to connect the town with its neighbors aren’t just figurative; they’re literal. Included in the design is a raised bridge adjacent to North Main Street, along with a waterfront promenade and boat slip. Although not specifically mentioned, the site will likely include some kind of flood protection too.

Here at Construction Guide, we’re always interested in new design projects in our neighboring states. Considering the success of Libeskind’s local work, this project promises to be an exciting and valuable addition to this small New Jersey town.

ACADIA 2020 Launched – With a Difference

The Association for Computer Aided Design in Architecture launched a few weeks ago, but this time with a difference. Traditionally, the event is held at institutions across America, but due to current social distancing rules, this wasn’t possible.

Instead, the event was held online. There were various events, including keynotes and conferences, held under the topic of Distributed Proximities. Considering the current social distancing regulations, this felt like a fitting title.

The new format meant that, along with traditional industry topics, the panel also looked at things like AI and machine learning in architecture. Importantly, too, hosting the event online massively improved accessibility for those who otherwise might not have been able to attend.

In its 40th year, the event also reflected on how the relationship between architecture and computing has changed over the years. Speakers looked at the importance of technology in design and how it’s helped builders to turn these designs into reality.

Construction Guide was very happy to attend the virtual conferences and we were all very excited at the ideas being discussed. Hopefully this year’s event will have far-reaching impacts on the future of this kind of conference.

How Can the Construction Industry Find Diversity Through Action?

In light of the Black Lives Matter movement, many industries began looking at their own practices. In many architecture firms, leadership is most often dominated by white males, often due to the relationship between background and educational opportunities.

But diversity is a vital component of any business that helps to breed success and innovation. We at Construction Guide acknowledge that this is an important and ongoing process, and plan to do everything possible to reflect the values of society in our business.

To improve workplace diversity, companies must start by arranging resource groups for their employees in order for them to lead the conversation on changes. Forming these groups gives opportunities to voices who may have previously been silenced, and can have a big impact on morale and mental health.

But it’s important for firms to be proactive in this regard. For example, the architecture firm FXCollaborative began looking at their diversity statistics back in 2014. Now they have a workforce that’s 46% female and 39% non-white. While this doesn’t yet fully represent a diverse workforce, it’s definitely a step in the right direction.

Finally, it’s important for firms to recognize that diversity isn’t just a trend, but can be valuable for business. For example, a diverse group of designers can help to create spaces that work for all, and in the process can support colleagues to better understand their roles.

We at Construction Guide value the importance of diversity and all it can offer to business. We encourage other construction firms to take a look at their employee diversity and proactively work to make it better.

Architecture of the Past Highlights Lack of Foresight

In the USA, coastal counties make up 40% of the country’s population, but represent less than 10% of its land mass. In 2014, there were 127 million people living in coastal houses built between 1970 and 2010. But climate change in recent years has shown us how little foresight architects of the past really had.

Rather than acknowledging the impending problem, designers doubled down and simply vowed to create taller and stronger buildings to cope with rising sea levels and more frequent hurricanes. Instead, they should have focused on rethinking the way we interact with the space around us.

Take for example the impact of Hurricane Sandy on New York City. The event showed how unprepared the city really was for a natural disaster, but also how the poorest members of society already lived in areas that would be the worst affected. But little has been done to address this problem should it happen again.

Here at Construction Guide, we understand the impact climate change is having on the way we interact with the space around us. But how can we really address the issue and find solutions until we’re able to drastically rethink the way we live?

Over the last few years, building and material costs have seen a stark increase. But at the same time, the design and building process has remained fairly stagnant, even with the introduction of new and exciting technologies. With a new startup, though, that might all be about to change.

A team of architects from MIT and Georgia Tech has founded WoHo, short for World Home. Their company designs flexible building components that can be combined in various ways to create a building.

The intention is to create components, such as large concrete bricks, that can be used in different designs, and are cheap and easy to manufacture. What’s more, it’s their intention to make them entirely reusable, which will cut down on destruction and construction costs in the future.

It’s not dissimilar to previous attempts at modular buildings, and the firm claims their pieces are suitable for low- to high-rise structures, but will be best around the mid-rise level. The main difference between WoHo and previous modular structures is that their components are much more versatile and flexible, making them suitable for all kinds of designs.

WoHo is still in its early stages, but has recently secured $4.5 million in seed money from Katie Rae, CEO of The Engine, an MIT fund. WoHo is currently building a test project in Madrid, and has a second one earmarked for Boston in 2021.

Construction Guide is very interested in the impact this could have on the construction industry. Fully flexible and reusable building materials have the potential to revolutionize the way affordable projects are designed and built, and we can’t wait to see what the future holds.