The architecture of Notre-Dame de Paris 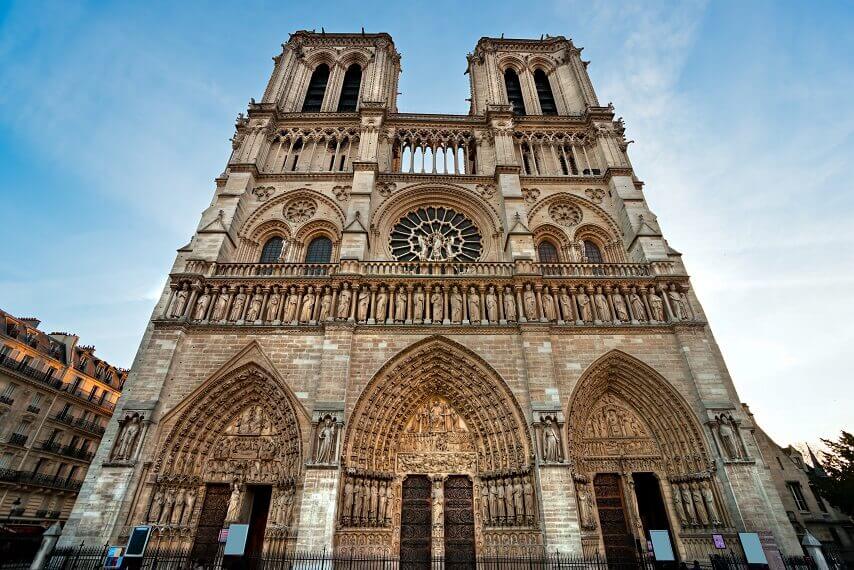 Notre-Dame is probably the most famous cathedral in the world, and this masterpiece of gothic architecture has stood for over 850 years! It has some of the most distinguishable features that make it such an international treasure, and both the building and its artwork bring in millions of visitors every year. Read on to find out more about the architecture that makes this cathedral so famous.

Notre-Dame is famous for its rose windows, which are a typical feature of gothic architecture. They consist of circular windows fitted with stained glass, and Notre-Dame has three in total! All of them still have their original stained glass, which was fitted in the 13th century! Luckily, all three windows survived the recent fire.

The original central spire (the main part that was damaged in the fire) was removed in the 18th century because it was too unsafe to be left alone, and was completely replaced during restoration works in the 19th century. This is one of the most recognizable parts of Notre-Dame, and will have to be rebuilt completely.

Another major recognizable feature of Notre-Dame are its Western towers, which are another piece of typical gothic architecture. The towers were bult in the early 13th century, and stand 223ft high! They were originally meant to have spires added, but this was never completed. However, this “incomplete” look separates Notre-Dame from other typical gothic cathedrals of the same era. The towers are three stories high, and decorated with early gothic carvings from the Old Testament.

gargoyles of Notre-Dame de Paris
The overcroft is one of the most underrated parts of any church or cathedral, but is one of the most impressive. In a typical gothic cathedral, the ceiling you see when you look up hides the overcroft, which is the support system for the external roof. In such a massive building, this has to be very big and very strong. The overcroft of Notre-Dame was referred to as a forest, and was made up of oak beams that measured up to 100m! These were still the original 13th-century beams, and were completely destroyed in the fire.

Gargoyles are an instantly recognizable feature of gothic religious architecture, although their main purpose has never been confirmed. Anyone who has seen The Hunchback of Notre-Dame will have a personal connection to the gargoyles on the cathedral, and with a bit of research, you can even find the statues that inspired the characters in the film. Although you can’t see them properly from the ground, many people will know Notre-Dame if they see a picture of the gargoyles.

The recent fire at Notre-Dame is one of the most devastating things to happen in a long time. Although the renovation and repair will be a long and expensive job, there have been several massive donations already, which will go a long way to restoring the building. The Arnault family and the LVMH Group have pledged 200 million Euros to repair the cathedral, and we hope it’ll be restored to its former glory so it can be appreciated for another 850 years.